One Family's Experience of Flying During the Pandemic

Will they make the choice to fly again?

I've always said I love traveling, except for the getting there part. That has never been so true as during this pandemic.

Like many of us, my family has dealt with the disappointment of trips canceled and vacations disrupted.

So when we had the chance to go to a family home in a quiet part of Florida — somewhere we could isolate easily — we decided to go for it. We could hunker down. Play it safe. Avoid contact.

The only sticky point? On the way home, we would fly commercial.

This was back in June, before Florida became one of the country's hotspots. In fact, the state's cases literally doubled in the time we were there.

Those skyrocketing numbers — like the Florida heat — made us sweat. Should we still fly home? We talked about scrapping our plans for flying, renting a car and driving the 20 hours instead, but when factoring in a hotel stay and countless bathroom breaks along the way traveling with our 8- and 10-year-olds didn't sound any safer to us than flying.

So we flew. Here is how we prepared:

We'd ordered face shields the same day we decided to go to Florida. I had read that face shields added an additional level of safety to masks so we found some that arrived in our home just in time for our trip. I'm lucky that my kids understand and respect the pandemic and its dangers, and never once questioned wearing both the shields and masks on the journey. In fact, my 10-year-old daughter told her dad "I'd rather look weird for a few hours than get a deadly disease there's no cure for."

I didn't see anyone else board the plane wearing the face shields, but it did seem everyone was respectful of the mask requirements, which was great to see.

2. We thought about our seating

We paid extra to sit in the third row of the plane, where the middle seat would remain unsold, according to the airline. This took our price from $98 per ticket to $158 per ticket. With the whole row to ourselves, we were able to sit in the window and middle seat, leaving the aisle seat empty and allowing more space between us and anyone in the aisle. 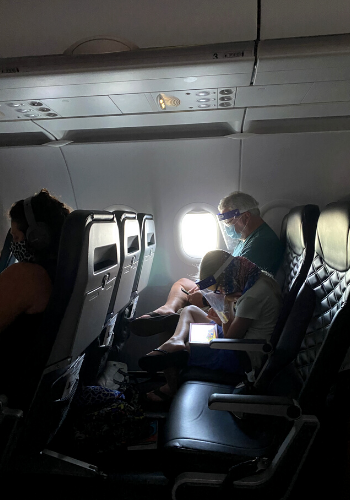 Because of the pandemic, most airlines are now boarding the airplane from back to front, which, when you think about it, seems to make much more sense anyway. That meant our third row was called last for boarding. We waited until the line had dwindled down to just a few people before we joined it. Once the gate agent checked our temperature with a touchless thermometer, we were cleared to board.

We took disinfectant wipes and my husband and I wiped down all surfaces on the seats. We also had hand sanitizer and used it liberally in the airports, especially after going through security and a bathroom stop, and then several times throughout the flight. Because of the pandemic, TSA is allowing people to take 12 ounces of hand sanitizer in their carry-ons.

5. We brought our own food

We were traveling right at dinnertime so we packed sandwiches rather than buying them at the airport. We ate in the waiting area chairs before boarding — after sanitizing hands and wiping down surfaces, of course.

Would we do it again?

Despite our preparations, I can't say I ever felt completely safe. There were times I felt especially worried: We were the first ones off the plane, but people were crowded in behind us in a hurry to get off, just like always. We touched bins going through security, and my husband was selected for a more thorough patdown. We got caught in a tide of people on an escalator.

Would I do it again? Not unless I had to. I hate to say that because I did feel like the airline was doing what it could to keep us safe — such as requiring masks, taking temperatures before allowing boarding, and telling people to open their vents to maximize airflow.

But it was still an extremely stressful experience, and — for us — felt like an unnecessary risk in a time where it feels like the responsible thing to do is avoid unnecessary risk at all costs.

We have been home now for nearly a week, and — thankfully — have no signs of COVID-19. Because of our trip, we are back to social isolation for the time being, reminding me of the early days of the pandemic.

We can fly. But should we? That's a decision your family will have to make, assessing the risks you're comfortable with. As for us? We've decided to keep our feet on the ground at home, at least until the country has COVID under control. Until then, the only traveling we'll be doing by air is in our dreams.

Hitting your inbox on the second Tuesday of every month, Macaroni Kid Family Travel comes loaded with reviews of great destinations for families, important advice and inspiration for oodles of family fun.